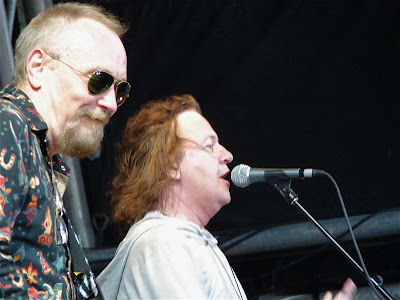 Just in from Sydney retailer Mojo Music is news of a live Saints reformation album. I'd heard whispers about this but it's slipped out almost unannounced. I wasn't at the Pig City show in Brisbane but I've heard it and it's a damn fine gig.

On July 14th 2007, 6,000 people celebrated the band and their legacy in a concert called “Pig City – Brisbane’s Historic Soundtrack”. The show came about after author Andrew Stafford was approached to transform his book on the history of Brisbane music, Pig City, into a festival. Stafford says the set lived up to lofty expectations. "They ripped into" Swing for the Crime", and like most of the people in the place, I just couldn't believe it was happening," he said. "When they hit the horn solo, I died. And went to heaven."

Chris Bailey, Ed Kuepper and Ivor Hay walked on stage to thunderous applause as a thank you and the band repaid the faith with a set that nailed your head to the back wall. This was not a nostalgia show, this was a band playing at the peak of their powers and showing what made them so relevant and so inspiring to a world of bands from The Go-betweens to Birthday Party to The Hives.

From the first strains of “Swing For The Crime”, through “I’m Stranded”, “Know Your Product””Messing With The Kid” and finishing off with their unique version of “River Deep Mountain High", this was the Saints fulfilling their promise in front of an adoring crowd. As Ivor Hay said “We had unfinished business and Pig City was the way to do it”. Originally only available for sale at The Stranded and All Tomorrow's Parties shows, it's now been repressed as a one off retail version of only 1600 copies. Buy now or miss out.

Click here to hit up Mojo Music for a copy.
Posted by The Barman at 7:01 AM