Put another dime in the jukebox, Obama

Jackie Fox of the Runaways (who's now a lawyer) reckons Obama is a doppleganger of Joan Jett. Now who says the legal fraternity s out of touch? I like this piece. Thanks for spotting it, Retro Kimmer!
Posted by The Barman at 5:06 PM No comments:

I hate to be a street team for the Abko label but this may be very special. One disc contains a bunch of unreleased songs. 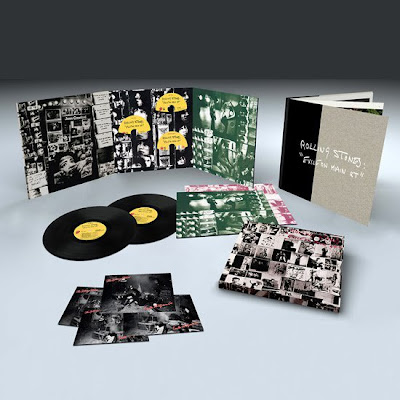 If you need to ask Who? you're reading the wrong blog

Nice interview with Strait James in Pommy rag The Guardian here.
Posted by The Barman at 9:08 AM 1 comment:

Kim Fowley and the Art of Girl Band Management

I have no idea if the new Runways bioipic is any good but you can't deny reviews like this, involving manager Kim Fowley, attract attention:

Fowley likes the marketing potential of Jett’s all-girl rock band and starts putting together the package. Soon, he becomes their preposterously self-important guru and sleaze-ball Svengali: “Not women’s lib, women’s libido,” he screams. Fowley puts them through his version of rock ’n’ roll boot camp, teaching them to scream “I want an orgasm” while tossing dog turds and bottles at them to prepare them for hostile audiences.

Yes. Sounds like compulsive viewing. The Barmaid's gonna love this one. More here. I'm off to spin Fowley's wonderful "Outrageous" album.
Posted by The Barman at 4:37 PM 3 comments:

Let's bask in the reflected glory of the Stooges' induction one more time and consider some news that recently popped up. A read of The Hounbdblog's latest entry reminded me that I'd seen these kernels a few days ago on the unofficial Stooges forum:

2. The same label has a Live at Ugano's tape in their possession.

I'll let The Houndblog have the last word on the Hall of Lame broadcast. I watched a download but he got to watch it with Danny Fields.
Posted by The Barman at 1:14 PM No comments: 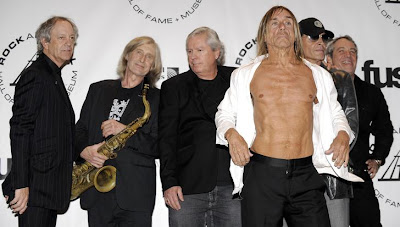 Labels: iggy and the stooges, rock and roll hall of fame

Yes, I do want a limited edition deluxe version of the Raw Power re-issue

At $A67 it seems like a reasonable deal. All those bonuses. But there's a sting in the tail and you don't get to know about it until your're 90 percent through the order process. Sixty bucks shipping to Australia? Don;t worry folks, there will be a "budget edition" and it's going to set you back considerably less on Amazon.
Posted by The Barman at 12:07 PM 4 comments:

Labels: iggy and the stooges, raw-power

Whatever gets you through the concert

Rock and roll is all about things that occur from the waist down. A good show has been known to move grown men to tears, although this guy's reaction to a Jimmy Barnes show might take some beating. It puts a different spin on the title of one of Barnes' recent albums. "Double Happiness", anyone?
Posted by The Barman at 11:52 AM No comments:

How to Fix The Hall of Lame

That's the title of this thoughtful Village Voice piece. As the Voice notes, it's all about context.

The committee picking inductees does itself no service with some bizarre omissions and downright lame inclusions. Do you want them spelt out?

Meanwhile, the Stooges are about to be inducted. Don't care? The Ig remains sceptical - understandably so after seven unsuccessful shots. As Stoogeologist and ace photographer Robert Matheu said in an email yesterday, en route to the ceremony: "Having the Stooges in gives them some credibility now- you can quote me on that!"
Posted by The Barman at 7:19 AM No comments:

Labels: hall-of-fame, iggy and the stooges

The word is that Powertrane, the Real Rock and Roll band led by Michigan's Scott Morgan, is in the past tense.

No official announcement but Scott is said to be focussing on his solo band and forthcoming release on Alive. A pity to see Powertrane go after a nine-year run but here's something to remember them by, from Don Was' online music TV channel.

Posted by The Barman at 1:24 PM No comments:

Did anyone see media whore/breakfast TV weatherman Grant Denyer on Sunrise yesterday wearing a T-shirt emblazoned with Mick Rock's Iggy shot from the cover of "Raw Power"? It looked like a designer knock-off (read: bootleg) and I'll bet my right one that the clueless celebrity has no idea.
Posted by The Barman at 5:56 AM No comments:

The Doors to Schools of Learning Might Remain Closed

Dateline: Florida, 1963. Thanks to the folks at Mojo (the magazine) there's evidence that the pre-Doors Jim Morrison was not a crash hot actor. This appears to be some sort of public education film telling teens that the university place of their dreams doesn't await them unless they knuckle down and study.

Jimbo, soon to be a Lizard King, was then just the 20-year-old son of a US Navy Admiral who made it into film school at UCLA. Someone now needs to uncover a long-buried anti-drugs public service ad and life will be complete.

No News is good news

For those of you not in Ostralia, the local media has been flooded this past week with horror reports from Whitney Houston's train-wreck local tour.

Tales of an unwell Whitney scarcely able to hit a high note and taking 15-minute "costume change" breaks have been contrasted with images of pissed-off fans walking out in protest after forking out 200 smackers a ticket.

As the tour became more of a disaster, the louder were the screams of defence from the promoter, who was desperately justifying why Houston should be given a "fair go".

Prompting similar thoughts about the way Baby Boomer icons on their last career legs are toured in out-of-the-way (i.e. Not The USA) countries in the hope of turning a buck comes the news that Huey Lewis and The News are non-starters for an Australian tour. Huey (why do I laugh when I type that name?) is citing the pressing need to finish a new album. Must be one important record.

On the other hand, near non-existent ticket sales would have nothing to do with this, would they? Or maybe the wails about Whitney are forcing a re-think about audience gullibility.