These guys are punk-pop/cock rock/sleaze of the highest order from Brisbane. Ever get the feeling they're taking the piss?
JJ Speedball - Homerun

There's a review of their Dictators-meet-the-Hard-Ons CD "Behind The Enemy Lines" at the Bar here.
Posted by The Barman at 5:56 AM No comments:

Sign of The Three-Eyed Men will highlight Elevators' glorious legacy

I've always been more of a Roky man but this sort of indulgence might sway me.
Posted by The Barman at 5:05 AM No comments:

Featuring the late Simon Knuckey on gtr. My brothers and I used to nickname him The Blind Man for his distinctive stage presence. A fantastic cover of The Atlantics song.

Get off your arses, Australia!

It seems Neil Young and his band are pissed off with Australian crowds for sitting down during the indoor shows of the current tour. Reports I've heard from some put the blame squarely on heavy-handed security. Fair call but if you all get up at once WTF are the goons going to do? More chatter here.

I'm glad I went to the Big Day Out in Sydney (there are some words I rarely type) to see him. Check the I-94 Bar in a day or so for a long-winded, rambling report.
Posted by The Barman at 6:48 AM No comments:

Stumbled across this on Facebook today - just after having caught Neil and band in sizzling form at Sydney's leg of the Big Day Out. Megan Bawden is a singer-guitarist from Melbourne and that's Cathy Green (X) on bass (with Cormick Green helping out on drums and pian'er.)
Neil Young You're My Hero

From 1986's "A Cast of Aspersions" album. A clip I'd forgotten or didn't know existed.

Posted by The Barman at 5:59 AM No comments:

New York Dolls are reportedly putting the finishing touches on the recordings for their new album with legendary producer Todd Rundgren and are scheduled to begin mixing next week. The CD, which is being tracked at Rundgren's studio on the island of Kauai, marks the first time the two have collaborated in 36 years since Rundgren originally produced the NEW YORK DOLLS' eponymous debut album, "New York Dolls". Rundgren was reunited with DOLLS founding members David Johansen (vocals) and Sylvain Sylvain (guitar, vocals).

I'm just hoping it sounds better than the last collaboration with Rundgren. Shadow Morton was obviously unavailable.
Posted by The Barman at 9:35 PM 1 comment: 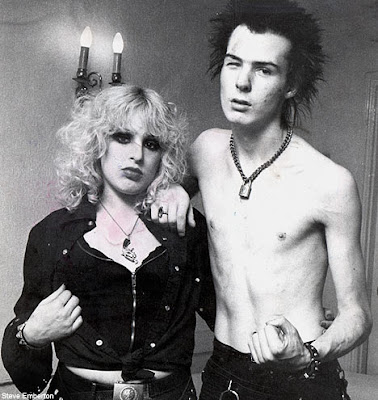 That's the title of a new UK docco out next month and it does seem a little misleading. Besides the fact a lot of people don't care, the other reality is that the makers (and us) will never know. Still, if you want to part with your heard-earned you can read the hype here.
Posted by The Barman at 5:41 AM 2 comments:

I suppose one of the things with Ron Asheton's passing will be people posting previously unseen footage like this. Anyone want to clue me in on who's in this DAM line-up? 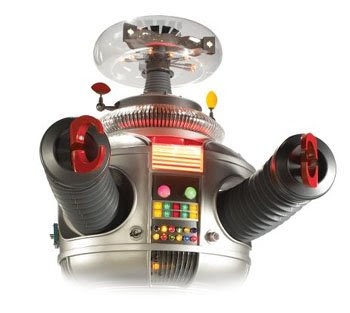 The Robot from Lost in Space has died, aged 69. That does not compute.
Posted by The Barman at 7:12 AM No comments:

Still on The Houndblog, he posted a really nice Dee Dee Ramone story here.
Posted by The Barman at 5:57 AM No comments:

At the Houndblog's blog, with some nice pix taken by his wife, Gillian McCain, who co-authored Please Kill Me. Go here and listen to an unissued Stooges track.
Posted by The Barman at 5:55 PM No comments:

The line-up with Bill Cheatham and Zeke Zettner. Here.
Posted by The Barman at 12:39 PM No comments:

The Hydromatics were the Sonic's Rendezvous Band-focused trans-Atlantic supergroup featuring Scott Morgan and Tony Slug. Shame on you if you didn't know. This version of"City Slang" is from their forthcoming DVD which looks like a reason to stay in.

Posted by The Barman at 8:42 AM No comments:

Stooges miss out on R & R Hall of Lame (again)

This was just reported by here The Ultimate Nullifier (aka Box Taylor from Powertrane, Mazinga et al.) Excuse the endless Stooges posts over the last 10 days but this is beyond belief.

Stupid, myopic dipshit judges. The timing is nothing to do with Ron Asheton's passing (the votes would have been compiled weeks ago) but that just proves what numb-nutted, clueless cockscratchers they are.
Posted by The Barman at 11:25 AM 1 comment:

Chapter 247 in the War Against The Jive

It's from Annandale Hotel in the second half of last year. Cheers to Boris the Video Man!

Posted by The Barman at 5:56 AM No comments:

A 24-minute interview on classic Detroit radio here.
Posted by The Barman at 8:36 AM No comments:

Legend or whore? You decide

It's for an online insurance company.

Personally, I think he can do whatever the fuck he wants. I'm just thankful the ad agency didn't chose to butcher one of his songs. If you click through to YouTube you can see it's provoking colourful commentary.
Posted by The Barman at 5:48 AM No comments:

A line-up that speaks for itself, no? 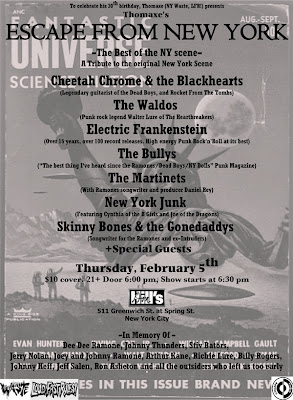 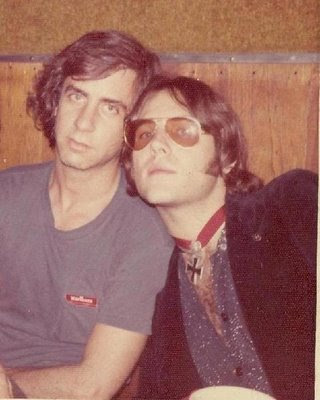 The Houndblog - one of the crew from the world's coolest radio station WFMU - has a great Ron Asheton tribute from onetime Stooges mentor Danny Fields here. That's Danny and Ron pictured.
Posted by The Barman at 4:47 PM 1 comment:

It Came From Detroit

There's a new trailer for the movie on the Detroit rock scene of the 1990s.

It Came From Detroit Official Trailer (New) from James R Petix on Vimeo.
The soundtrack looks very cool. More info at itcamefromdetroit.com
Posted by The Barman at 5:54 AM No comments:

Back from holidays after the depression news of Ron Asheton's passing.

On the I-94 Bar front, you can read Mark Sisto's moving tribute here and you can also leave a comment.

Here's the details of the first of a few tribute shows:
Niagara and The Colonel invite friends to pay tribute to the late Stooges guitarist, Ron Asheton as they host, “Ronnie…Thanks A Million”, Saturday, January 17th at 9PM at the historic Music Hall Center For The Performing Arts in downtown Detroit.

There is free admission but attendees are encouraged to donate what they can to help cover the night’s expenses and Ron’s favorite charity, The Michigan Humane Society.

Niagara, Asheton’s former Destroy All Monsters and Dark Carnival band mate and muse will host along with Colonel Galaxy a celebration of Ronnie’s life and a chance to express their love along with all of his friends and fans with a tribute for a guy Rolling Stone called: "One of the greatest guitarists of all time”.

Tributes from those who knew him- and some who didn’t, but were influenced by him will speak from the stage where such legends as WC Fields, Miles Davis and Billy Holiday performed, Ron’s music will be played and a tribute film retrospect by Tim Caldwell will be shown. Music Hall is Detroit’s oldest performing arts venue (1928) and is a beautifully restored facility, appropriate for this memorable night.

There will be a cash bar in the Hall as well as in Jazz Café for attendees.

Plus, a special Jazz Café  show -

A Dark Carnival alumni performance led by Bootsey X  & The Lovemasters and some VERY special friends will play in honor their late band mate and friend, in the Jazz Café following the main stage tributes at 11 PM.

Ron Asheton was more than an innovative guitarist, he was an easygoing, subtly hilarious guy- who, simply and effectively created a sound and aesthetic, which will forever reverberate as long as there are guitar players. Ron maximized his early work into postmodern art of the highest order. In retrospect, Ron’s influence cannot be overstated, only imitated.

Ronnie used to like to say, “thanks a million” in mock gratitude when joking with friends. Now here’s our last chance to say, “Ronnie… Thanks A Million.”

More info for this tribute may be found on  www.myspace.com/niagaradetroit

Found dead yesterday at his Ann Arbor home. Very sad news.
Posted by The Barman at 2:40 AM 1 comment: