I shit you not. Doesn't sound like he had exciting tastes.
Posted by The Barman at 6:49 AM No comments:

Raw Power is sure to come running for you

The always erudite Houndblog is right onto the "Raw Power" re-issue, taking us through his advanced copy of the package here. Anybody not going to grab a copy?
Posted by The Barman at 8:07 PM 2 comments:

Unearthed Stones tracks from the massively muddle-headed "Exile" recording sessions? It says so here. Did Keef nod off and lose them behind the lounge?
Posted by The Barman at 6:46 PM No comments:

The long-lost Melbourne teenage band's entire recorded output, plus live stuff, is being re-issued by Afterburn Records (same folks who did Bored!'s re-issue) on CD. Check out the contents:

I feel unclean pushing anyone in the direction of oh-so-cool hipster e-zine Pitchfork but how else are you going to hear "Goodbye Sweet Dreams", a track from Roky Erickson's new album? Thanks to T Tex Edwards for the heads-up.
Posted by The Barman at 7:31 AM No comments: 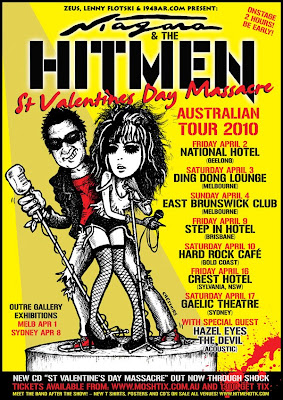 Tickets on sale today at Moshtix.
Posted by The Barman at 10:38 AM No comments:

S.F. Sorrow must have hated his parents

It’s fun to backtrack and listen to some music that hasn’t been on personal hi-rotation for a while, especially if it involves re-discovering an old classic, but it always raises more questions. For example, the Pretty Things have been spinning in the I-94 Bar of late. Which raises the query, Why did the Sorrows name their kid “S.F.” and what did his initials stand for?

It's all a bit Moon Unit Zappa to my way of thinking and probably led to S.F. ultimately losing the plot, as the storyline of the album reveals.

And speaking of Kim Salmon...

I've been giving "Sin Factory" a bashing over the last few days and it's still a magnificent piece of work. Kim Salmon has another line-up of the Surrealists behind him these days and an imminent album. I'm reliably informed it's nothing like "Sin Factory" in the commercial stakes.

Patrick Emery penned an interview you can read on Oz music site Mess & Noise here.
Posted by The Barman at 10:04 AM No comments:

Here's a story about an AC/DC fan and mum-to-be hanging on and getting value for money from her ticket. Kudos to the journo for the lead par about it being a long way to the cot.
Posted by The Barman at 9:29 AM No comments: 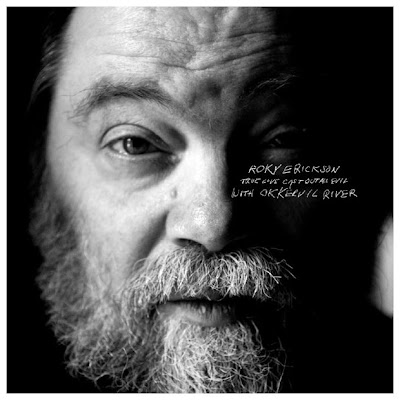 The fact that he's recorded a new studio album with Okkervil River means Roky Erickson's return to the "real" world (or at least a version of it) is complete. More info and a track-listing here. Hope it's good.
Posted by The Barman at 7:32 AM No comments:

If you're in the area 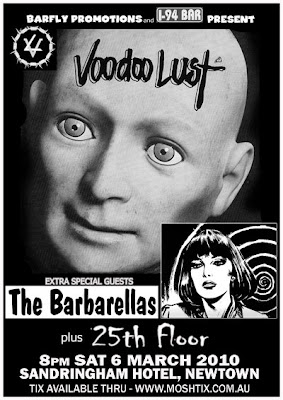 I was once accused of writing a disparaging, haircut-obsessed live review of Voodoo Lust in a national rock weekly 25 years ago but it wasn't me.
Posted by The Barman at 10:35 PM No comments:

When too much Raw Power is never enough

April 27 needs to be marked in your diary. Here's why:


So...the original mix - finally mastered to CD properly, I'd guess - plus a stack more good stuff. Fifteen previously unheard tracks. Smart people would bookmark this site. That would be you?
Posted by The Barman at 9:03 AM No comments:

High Voltage but I won't be flicking the switch to On

From online marketing and media magazine Mumbrella comes news that the Auststereo radio network in Australia is launching a temporary digital station playing AC/DC music all day, every day. Besides the fact that I don't have a digital tuner and no-one I know does, this is vaguely interesting on an academic level but personally irrelevant.

You see, the love that much of the music-listening world lays on AC/DC remains one of life's greatest mysteries. Especially the way Americans lap them up. I just don't get it. Yes, the Ramones churned out many albums where the Song Remained The Same, but not on this sort of scale. Plus the Ramones' music was exponentially more listenable.

I don't care that much that vast armies of bogans (translation: downmarket suburban hillbillies) align themselves slavishly to the band. They have to follow something. I have friends in low places and am not averse to the odd bit of mono-brow culture myself.

Bon Scott had character - moreso than his successor Brian Johnston - but I'll bet he wouldn't be half as popular if he hadn't unfortunately expired in the manner he did. Suck more piss, and all that, even if other substances may have been at work. We'll never know.

As large as the stages are that AC/DC plays on, they are Just A Bar Band. They play Here's the rub: hugging, unexciting 12-bar blues inspired rock that says nothing. They're tight as a fish's arse, but they're a pub rock relic.

Admission: I read Aussie journo Murray Engleheart's bio on 'em and he kindly autographed it. It was a good read. I think there are a couple of their LPs lurking in one of the crates at home, dating from schooldaze. "Long Way To The Top" is an icon embedded into the Australian psyche. So are Men At Work. Big whoop.

You can like AC/DC. Love them to fucking death, for all I care. Leazve me out of it and don't make me listen to the vast majority of their records or this digital radio station, as brief as its life may be.
Posted by The Barman at 3:48 PM 1 comment: 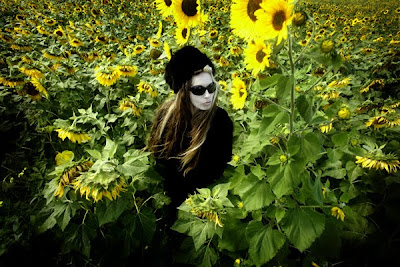 Detroit art punk rock queen Niagara will team with iconic rock and roll soldiers the Hitmen for a seven-date Australia tour in April.

Niagara made a name as the femme fatale of Detroit bands Destroy All Monsters, whose ranks included late Stooges guitarist Ron Asheton. Destroy All Monsters released a string of singles and toured the US and England extensively in the late 1970s and early ‘80s, keeping alive the legacy of the Stooges.

Her next band was Dark Carnival, a travelling carnival of high-energy underground artists. Membership included Niagara and Ron Asheton, as well as Stooges drummer Scott Asheton and Dead Boys guitarist Cheetah Chrome as well as a string of Detroit musical luminaries. The band issued albums on French and Australian labels Revenge and Zeus, as well as US imprint Sympathy For the Record Industry

Since the ‘90s, Niagara has concentrated on her exploding career as a pop art painter and has dipped back into music only rarely. Niagara exhibits to vast acclaim around the world and her artworks command huge prices. She was recently commissioned to provide a design for a own line of Vans shoes. The tour will coincide with exhibitions at the Outre galleries in Melbourne and Sydney.

The St Valentine's Day Massacre Tour will promote the CD of the same name, released locally on Savage Beat/Shock. The album captures the one-off February 2008 show at The Crest Hotel at Sylvania in Sydney when Niagara was lured out of retirement, with the Hitmen as her backing band.

The show as a spectacular success, drawing a full house of rabid fans, some of whom travelled from overseas to be there.

Fans can expect more of the same with a two-hour show comprising a Hitmen set followed by a high-energy bracket from Niagara, reprising songs from Destroy All Monsters, Dark Carnival and the Stooges.

Niagara and the Hitmen proved to be a scorching combination last time out. Anything could happen – and will.

The Hitmen are one of the Australian rock scene’s most enduring acts, a Radio Birdman outgrowth who took underground music to the suburbs and towns.

They were re-animated by principal members Johnny Kannis and Rock and Roll Hall of Famer Chris Klondike Masuak in 2007, and have rallied old and new fans since with their back catalogue re-issued in deluxe packaging by Savage Beat/Shock.

Dark Carnival made it to Australia in 1991 for a 43-date tour with the Hitmen. Niagara’s 2010 gigs with the Hitmen shows brings that connection full circle.

Tickets for the “St Valentine’s Day Massacre Tour” are on sale from February 18 through venues, www.moshtix.com.au or 1300 GET TIX

Niagara opens exhibitions at the Outre Gallery in Melbourne (April 1) and Sydney (April 8).

Special guest for the tour will be Gold Coast artist Hazel Eyes The Devil.

The “St Valentine’s Day Massacre” live album by Niagara & The Hitmen is out now on Savage Beat/Shock.

Flashez was an Australian music TV show, not a man in a raincoat. This is worth watching.

The BBC receives wraps for the quality of its programs, many of them very worthy and authoritative. Here comes a kick in the arse.

Australian TV is currently screening a BBC production, “The Seven Ages of Rock”, chronicling the history of rock and roll over the past 50 years. Chief researcher and a frequent on-screen commentator is British writer Charles Shaar-Murray, who does know a thing about the subject, and it’s fleshed out with a generous number of interviews with principals. Unlike a recent documentary exploding so-called myths around the Rolling Stones that aired here recently, it features actual music from the bands it mentions. It’s also infuriatingly shallow and obsessed with the British take on things.

Yes, the Brits took rock and roll from the Americans and sent it back to them for a good part of the ‘60s and ‘70s, but if they’ve foisted this sack of shit onto the same market they deserve to be nuked. Any claim to balance are contextual correctness is laughable. The first episode covered the birth of rock and roll, and while I’m no mop top fan it was implausible that the Beatles wouldn’t rate a mention in connection with the British Invasion.

Did African Americans have anything to do with rock and roll’s origins via the blues? Evidently not. Inexplicably, it was also like Elvis Presley had never existed. Am I missing something?

NY punk is solely under-represented in any British exploration of punk’s beginnings on both sides of the Atlantic and while I carry no torch for the un-killable dinosaur that is Heavy Metal, how in Jimmy Page’s name can you plough through an entire episode devoted to that genre without the name Led Zeppelin cropping up? Effusive talking head Shaar-Murray went to ground for that program - and who could blame him?

From the cursory choice of opening theme music (The Damned's "New Rose" gets a look-in - the band does not) to the smug and self-satisfied summation at the end of each episode, The Seven Ages is a crock.
Posted by The Barman at 1:18 PM 3 comments:

He Drank With Joey Ramone

Beer roadie for the Ramones? You could have worse jobs. The biggest disappointment in this for me, however, is that they drank Bud.

The entertaining blog entry started as a review of "I Slept With Joey Ramo0ne", the bio by Joey's brother Mickey Leigh. That book is essential reading and a Bar review of it appears here.
Posted by The Barman at 1:46 PM No comments:

Lists piss me off (even though the I-94 Bar runs a series of 'em to mark the end of each year.) But serious British newspaper The Guardian takes the cake. Rock and Roll novels with "Wuthering Heights" at number-five?

You knew this was going to be a load of old shit.
Posted by The Barman at 5:52 AM 5 comments: