"Was L.A. cooler back then?" Surely a rhetorical blog post

This LA Times writer poses the question. If it's not a self-evident answer, I don't know what is, even if I haven't been there for six years or so. He got his hands on the Rhino Records box set "Where The Action Is". So should you and me.
Posted by The Barman at 6:15 PM 1 comment:

Labels: los angeles, rhino records, where the action is

The St Peter's Guest House in New Orleans has a steady stream of Johnny Thunders fans beating a path to its door, eager to see the room where Mr Genzales shuffled off this mortal coil in 1991. Curiously, the owner has to buy extra supplies of number three and seven nameplates to replace the ones on the door denoting it as Room 37. Talk about anything that isn't bolted down (although in this case the numbers probably are.)

Here's the late Willie Deville talking about the discovery of Johnny's body. Willie was a neighbour (briefly):

Posted by The Barman at 5:11 AM No comments:

Going out this weekend?

Maybe you need some dancing lessons from James Brown?

Posted by The Barman at 7:51 AM No comments: 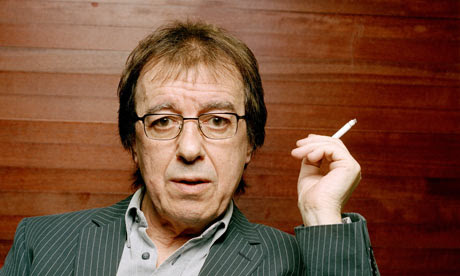 Seventy-two-year-old retired Stone Bill Wyman and his all-star band are playing Hull. OK, it's not Wembley Stadium but he's keeping good company and working. Albert Lee and Georgie Fame are on board for a 32-gig tour and old Bill is not ruling out a one-off show with his old band, should they play Glastonbury.

Of course the old pants man is doing much better than Mick Taylor.
Posted by The Barman at 8:29 PM No comments:

Zep for Glastonbury? You probably care a lot more than me

Led Zeppelin (the real deal - as far as they can be with their drummer extinct) are rumoured to be reforming for Glastonbury 2010. Read the vague rumour here. People always ask what I think of Led Zep, and even if they don't I tell them that I like the idea of the band a lot more than their music.

God knows I've heard enough of the band. I used to flat with a huge Led Zep fan who played them incessantly. Which means A Lot.

I loved the Yardbirds in their various configurations and acknowledge the debt heavy metal, as a genre, owes Page and Co. Just think, no Iron Maiden without these guys. Sheesh.

But I can't stand listening to Robert Fucking Plant and his air raid siren voice. This is coming from a fan of excess - not INXS, stupid - in many of its shapes and forms. Plant's voice is like nails on a chalkboard and overblown to the point of me wanting to say: 'Shut the fuck up, you drama queen'. He's a ham and Led Zep would have been great without him. I wish a groupie had stuck a mudshark down his throat.

Don't get me started on Freddie Mercury or Jimmy Barnes.
Posted by The Barman at 5:21 AM 3 comments:

I could have my arm twisted, I suppose

Posted by The Barman at 8:39 PM No comments:

Labels: get your yah-yahs out, rolling stones

This should not pass without mention 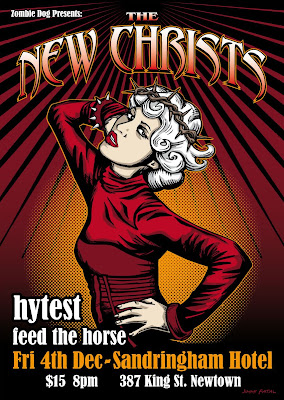 Posted by The Barman at 1:56 PM No comments: 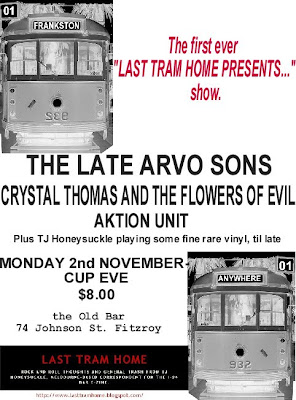 Posted by The Barman at 7:54 AM No comments:

It's a new film on the New York art and music scene of the '70s, narrated by Debbie Harry. Here's the synopsis:

In the late 1970s, the “greatest city in the world” was teetering on the edge of total chaos. A failed economy, crime and en mass housing corruption gave way to a city in crisis. Yet out of the economic and social strife that held the “Big Apple” hostage, a family of homegrown cultures that would forever change the world began to emerge. Downtown Calling not only documents, in detail, the evolution of New York City’s fertile music and art subculture during this period, but how its collective output continues to play a prominent, driving role in the international fashion, art and music industries today.

There's a preview here which isn't an embeddable clip. Mark the film makers down for that error in the Age of Web 2.0.

I'm not sniffing much underground music content here except for James Chance. It's probably very hip hop focused. I wonder why someone doesn't go the whole hog and document the No Wave movement. Surely there's enough in the way of amateur footage and survivors?
Posted by The Barman at 11:51 PM No comments:

Iggy signs up to The Lamest Marketing Idea. Ever

Holy shit! This is the story:

The "edgy" marketing promotion for a New Zealand broadband provider seeks Kiwi "musicians" via Idol-style auditions at a bar. Their prize will be to go into a studio to re-record "The Passenger" (after a fashion) with Iggy Pop - who'll phone his vocal in via broadband.

First insurance, now broadband. He's entitled to earn a crust but is there no end to what the man will shuck? Remotely, of course, in this instance.

The promoters are putting up a bar tab of - wait for it - 500 bucks to fuel the audition process. That should go a long way - if the contest is held in a phone box.

And the brand positioning of a tightwad broadband ISP aligning with the World's Forgotten Boy is what exactly...? At least Ig won't be duetting with Jet this time out.
Posted by The Barman at 11:41 PM No comments:

You know the headline's going to make you click this.
Posted by The Barman at 1:24 PM No comments:

While our 2007 posting of previously unseen 1971 Stooges photos caused a stir, we've unearthed another gem - courtesy of UK label Easy Action and Stooges Fan Club president Natalie Schlossman. Natalie found this stunning evidence of the Stooges playing a secret 1970 show at Wakefield Workingman's Club in the UK - two years PRIOR to their infamous London gig immortalised by photographer Mick Rock on the cover of "Raw Power." We now await Easy Action's CD from a tape of that Wakefield gig. 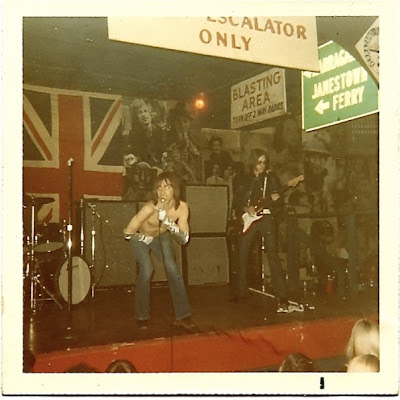 All The Old Dudes

Never been a massive fan but I can appreciate a lot of their music, so it would be bereft to mention the recent run of Mott The Hoople reunion shows in the UK, especially as I know a few Aussies who made the trek. There's a nice review here.
Posted by The Barman at 8:06 AM No comments:

Why John Mayer is a bore, figuratively speaking

If soft cock rocker and alleged bluesman John Mayer uses the threat of sodomy as a media management tool, perhaps it's a clue to why he went out with someone called Jennifer Anuston.

Do you think the interview is real? Is he?
Posted by The Barman at 5:50 PM No comments:

We'll get to reviewing the "1971" Stooges disc set on Easy Action in a week or so but here's some blather from Blog To Comm.

The always erudite Houndblog proffers opinion here.
Posted by The Barman at 2:18 PM No comments:

The incorporation of icons like Radio Birdman into Australian mainstream life continues at a less than frantic pace. Words is - and I don't watch the show so it's hearsay - last week the band got a mention in a plotline between two characters on soap opera Home and Away.
Posted by The Barman at 11:02 AM 1 comment:

Labels: home and away, radio birdman

And a belated goodbye to Blue Cheer bassist and singer Dickie Peterson who died last week.

Stooges will take Manhattan (or somewhere close by)

The Stooges dates start being thrown out there. ATP in NYC has them according to this.
Posted by The Barman at 7:59 AM No comments: 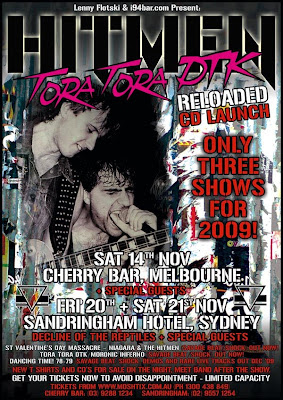 Three shows only. Maybe next time will be with Niagara.
Posted by The Barman at 11:44 PM No comments:

The Houndblog remembers Lester Bangs here. Click through to one of the greatest blogs on the Net, no shit.
Posted by The Barman at 7:57 AM No comments:

Probably the best and most comprehensive interview with Iggy and James Williamson you'll see this time around in the lifetime(s) of the Stooges has appeared in the Detroit Metro Times. Bill Holdship has conducted long interviews with both and has done a fantastic job.

Watch for the "Raw Power" original mix re-issue and ponder what might have been, post Ron, if Ig hadn't decided to put ex-Radio Birdman leader Deniz Tek on ice and pursue Strait James.

It's not too late on that front and reprising "Raw Power" songs surely needs a second guitar. Read it here.
Posted by The Barman at 4:02 PM No comments: 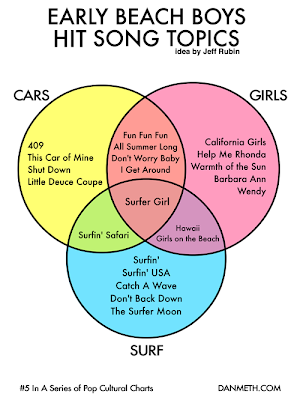 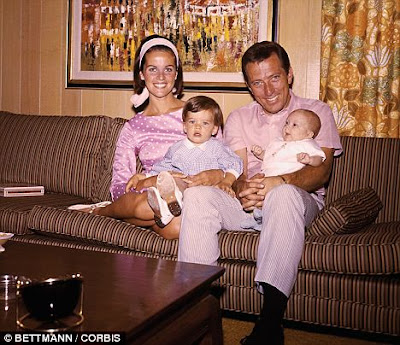 If Stashdauber (aka Ken Shimamoto) hadn't pointed it out I wouldn't have believed it. Crooner Andy Williams dropped LSD. Next they'll say Elvis took drugs. You say what?
Posted by The Barman at 9:57 PM No comments:

Out on MVD Visual on November 17 in the US and everywhere else shortly after, I'd guess.

THe collector's edition comes with a 10-track CD, which I'd suppose would be a re-heated version of the woeful "Sid Sings!" from his run of Max's shows.
Posted by The Barman at 5:45 AM No comments:

Let's hope the news that Fox Searchlight are in talks about a biopic about the Ramones bears fruit. And that the prickly question of musical rights is cleared quickly.

Of course the prospect of a movie being done well is another matter. The issue of a council clean-up and the need to turf out anything of no use here at Ramones Manor reminded me of that Stones/Brian Jones movie "Stoned" which was among the first things to be tossed out.Oliver Stone should hang his head in shame about some of the sillier aspects of "The Doors" and although I saw "Sid and Nancy" a couple of times while living in London in the '80s, it's not on my most-watched list these days.

Your suggestions for casting for the parts of Joey, Johnny, Dee Dee and Tommy are welcome in comments.
Posted by The Barman at 6:07 AM No comments:

Your Pretty Face Is Going To Hell

This is out on November 1, the Amazon listing says. Could there be anything left to say about this trio? Here's the promotional blurb:

"First-ever look at the intertwining, outrageous lives of three rock legends. When Lou Reed and Iggy Pop first met David Bowie in the fall of 1971, Bowie was just another English musician passing through New York City. Lou was still recovering from the collapse of the Velvet Underground, and Iggy had already been branded a loser... Yet within two years they completely changed the face of popular music with a decadent glamour and street-level vibe. With Bowie producing, Reed's Transformer album was a worldwide hit, spinning off the sleazy street anthem "Walk on the Wild Side." Iggy's Raw Power, mixed by Bowie, provided the mean-spirited, high-octane blueprint for Punk. Bowie boosted elements from both Iggy and Reed to create his gender-bending rock idol Ziggy Stardust. Your Pretty Face Is Going to Hell is the story of this friendship and the incredible productivity and debauchery that emerged from it. Presented here for the very first time are their stories interwoven in a triple helix of sexuality, glam rock, and drugs - as seen through the eyes of the people who made it happen."
Posted by The Barman at 7:44 AM 2 comments: