Gig of the Year (so far) 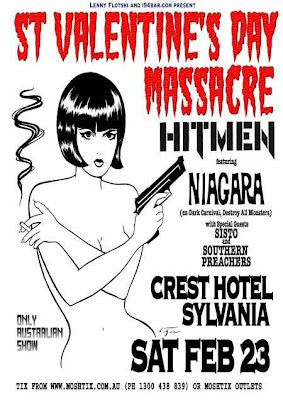 One show only so don't expect to see this happen outside Sydney. Expect a few surprises along the way too. Did we mention the I-94 Bar is co-presenting with Lenny Flotski?
Posted by The Barman at 2:11 PM No comments:

Nothing Grows In Texas

Rumours are afoot that the Sacred Cowboys may be playing out live in Australia again in the near future. The last visitation was Victoria dates only and hopes are high they'll make it further afield.
"Cold Harvest" - an updated collection of their best stuff with the odd new recording thrown in - is out on Spanish label Bang! and well worth hunting down.
Meanwhile, here's this clip of "Nothing Grows In Texas" for your viewing pleasure.
Posted by The Barman at 10:45 PM No comments: 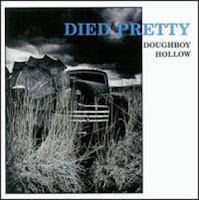 Died Pretty's classic breakthrough "Doughboy Holiday" has been spending some time on the CD rotel at the I-94 Bar lately, as part of a swot to prepare for an interview with the always entertaining Ronnie Peno.

If you haven't heard, DP are back for the Don't Look Back series of retrospective festival shows, reprising "Doughboy" with that album's line-up.

There's no doubt "Doughboy" deserves its place as a classic amalgam of rock and roll, pop and psychedelica. DP had been growing as a live act in leaps and bounds, but this long player clearly placed them at the forefront of the Australian underground. Hugh Jones' production is strong and was friendly enough to grab radio airplay. The melodies in the best songs were arguably the band's best yet and of course the album spawned "D.C.", a masterpiece (although "Godbless" was my pick.)

The Peno piece is upcoming at the Bar this week, otherwise here are the DP dates. They're going out in tandem with Ed Kuepper who will reprise his own ARIA-winning breakthrough, the shimmering "Honey Steel's Gold". 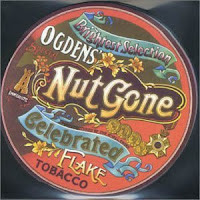 So what's this got to do with the Small Faces? Not much other than the fact that their Snapper Records re-issue of "Ogden's Nut Gone Flake" has been jostling with "Doughboy Hollow" for CD player time.

I scored the CD re-issue overseas last year and it underlines what a great band the Small Faces became around about this time. Nobody in England in 1967 – other than maybe The Kinks – did this rural-tinged, whimsical but rocking stuff so well. With the Small Faces, you had the bonus of Steve Marriott's distinctive, blues-schooled and turbocharged soul pipes.

History should be kind to the Small Faces but they sort of get lost in the wash. The bulk of the band went and teamed with Woodie and Old Rooster Hair and became The Faces; Steve went onto Humble Pie- and then off-the-rails. (I was going to say Marriott was a combustible character till I remembered he died in a house-fire.)

Of course "Itchycoo Park" spawned a whole crop of people over-using flanging as a production effect, but nobody's legacy is perfect. The Snapper re-ish includes 14 bonus tracks, out-numbering the original cuts by a good way. If you're going to do a re-ish, re-master it properly and give people extras as another compelling reason to buy it.

Klondike is Next Big Thing in Scotland 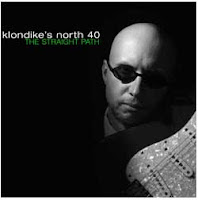 At the risk of wearing out the welcome, here's a review of the Klondike's North 40 album that had to be shared because it's so good. The author is Lindsay Hutton from Scotland, who used to run the wonderful Next Big Thing zine from the '70s/'80s. He now blogs here:

The esteemed Antipodean info-portal is now a label and what better way to kick off such a venture than with Chris Masuak’s current outfit. I know that most of you folks of a certain vintage are familiar with this guy’s guitar slinging prowess. However, there may be readers that fell by here by accident so let’s address that possibility. Chris is the Australian Ross The Boss and Scott Kempner sort of rolled into one. His work with The Hitmen (Shock has just reissued two sets to prove it) and Radio Birdman is the stuff of legend. Heck, he was even on the Manitoba’s Wild Kingdom album. We’re not dealing with chopped liver here.

Several generations of rock’n’roll kudos are wrapped up in all this. Old and in the way but positively bustling with that trademark stringbending. “Recipe for Disaster” takes place in the good old Four Winds bar. A tale of a bona fide catastrophe. “The Straight Path” is a head-banging example of a man wearing his indulgences well. It might introduce younger folks to these at the same time as it pushes the buttons for those of us who miss those rolls in the thunder. BOC fans will find much to transport them back to their old haunt. Screamin’ dizbuster cocktails all round.

The place where this would work most effectively is presumably in a club, louder than hell in a churchlike environment. The surf/metal cut and shut of “Gershwin May Consider” is a prime example of what is and always shall be the holy grail of our raison d'être here at this cyber rag.
Posted by The Barman at 9:51 AM No comments:

You probably Cate Blanchette’s name better than that of her husband, playwright Andrew Upton, who’s working with his missus as co-director of the Sydney Theatre Company.

But did you know he was interviewed on Australia’s national ABC Classical Radio recently and 'fessed up that his favourite band of all time was Radio Birdman?

Here's the playlist for his interview:

Guess the Dylan song was a no-brainer, considering his missus has played him on-screen.
Posted by The Barman at 9:08 PM No comments:

No, they’re not the Vines (these guys are from Melbourne and the plea has run in lots of forums, not just that one) but this is a band that obviously has no shame when they run a Help Wanted ad like this.

Q. Where would we be without the Internet?

A. Laughing at photocopied ads just like this on the noticeboard at Phantom Records.
Posted by The Barman at 10:17 AM No comments: