Hopefully, it's not just Cauze THEY Say So 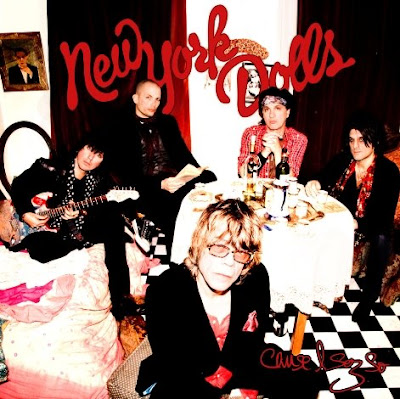 From the Please Kill Me Mailing list comes news of the Two York Dolls' new album. The studio reunion record was this side of OK, the live show that came to Australia a lot of fun if light on for the classics.

The jury's out on this one but we can live in hope it doesn't suck as bad as the Stooges' "The Weirdness" which is the benchmark for dreck :

Legendary rockers NEW YORK DOLLS will release their new album, "Cause I Sez So", on May 5 via the Atco label (which has been specially re-launched) through Warner Brothers.

After working together on the NEW YORK DOLLS' influential debut in 1973, the group reunited this winter with producer Todd Rundgren to record the new LP at Rundgren's studio on the island of Kauai, Hawaii.

"Cause I Sez So" features 11 original compositions and a new version of "Trash", which was on the band's 1973 debut album. "It was amazing working with Todd again, and I think we were able to evoke the special sound of our first album and drag it by the hair into the present," says frontman David Johansen.

The NEW YORK DOLLS swaggered onto the New York music scene in the early '70s, influencing a generation with its subversive mix of high-decibel rock and high-heeled androgyny. The original band recorded a pair of milestone records — "New York Dolls" (1973) and "Too Much Too Soon" (1974) — before breaking up in 1977. The surviving members reformed the group in 2004 to much acclaim, but soon lost bassist Arthur Kane to leukemia. Two years later, Johansen and Sylvain reunited again to record the NEW YORK DOLLS' third studio album, "One Day It Will Please Us To Remember Even This".

"Cause I Sez So" track listing:

I saw them at SXSW. They played a couple of the new tunes, which rocked serious ass. They were pretty great, sounding not like a nostalgia trip or a retirement fund booster, but a revitalized band. I've got high hopes for the new record, though I generally look askance at bands that re-record already classic tracks.

I gotta say, though, that David Jo looks a little scary close up. He had a hot girlfriend off to the side of the stage - isn't she feeding him?

It's a very unremarkable album, but you should judge for yourself. Downloadable here: