X doing "Going Down" at the Excelsior last Saturday night. Video by Carol (aka Cazzam)- and there's lot's more where this coems from if you use the preceding link.

I have no doubt that X (the Australian one) is one of the best (whatever that means) bands in the country right now. Lean, no bullshit and focused in a way that old hands only can be. So why did no-one under 40 front to their recent Sydney shows? You could pose a similar question right across the expanse of Live Rock and Roll Land. Kids just don’t get it – or don’t want to.

It’s a still-shrinking base when so-called music enthusiasts would rather download an emaciated version (read: MP3) of the Real Auditory Thing than go see it. Turning music into a commodity by reducing to easily transferred bytes of data is putting the concept of experiencing it in the live setting squarely on its head. The Internet gives musicians inconceivable reach compared to 10 years ago, and gives them un-thought of control over their own output, but who the fuck can find a way through the maze of the Net? It’s Clutter with a capital K and you really need to know where to go for your fix of whatever you need. The Big Boys still own parts of the farm - and the difference these days is that they haven’t yet worked out a way to realistically fence it.

Anyway, enough of this post-modern communications theory bullshit. What I’m saying is you don’t have to stay at home downloading MP3s all day. It’s OK to like live music too. The live scene is feeling the pinch – globally – at both ends of the spectrum. Kids won’t get out, us old folks are more selective in how we spend our hard-earned, post-mortgage payments. Things are tough all over for the enthusiast in a band who virtually pays to play his or her songs anyway.

X mixed it up a little in Sydney on Saturday night with the odd “new” old song, to launch their re-issue of “At Home With You” (Aztec Music). I, for one, hope their plans to tour the USA and lay down a “new” album (of old but previously unrecorded songs) come to fruition. I didn’t catch their Thursday gig, which a reliable source said was moderately crowded if not as intense as their two-night stand at the Sando a few months ago, but Saturday was as good as anything I’ve seen live this year. Good crowd in, too.

The bill was made more marvellous with the presence on the undercard of Tiger By The Tail (TBTT), the wonderful exercise in guitar ebbs and flows fronted by Bored! mainman Dave Thomas. Tiger ByThe Tail has a similar ethos to Dinosaur Jr in that they rely a lot on guitar textures, high volume, strong dynamics and slacker vocals to carry the day. TBTT don’t force their music down the throat all the time; they’re smarter than that. They’ll be cajoling you with harmonics one minute - before turning on a two-cent coin and spearing the sound right back in your face.

They don’t move around a lot or add one ounce of theatrics to their live act and, as good as their two hard-to-find albums are (I’ve playing the shit out of “Unitshifter” since Dave gave me a copy on Saturday night), you still need to see this band (and others like them) to fully appreciate their worth.

As a footnote, there are line-up changes afoot in TBTT so watch this space.

Paradoxicially, I still haven’t seen their Melbourne counterparts Eddy Current Supression Ring live, but I can’t help thinking that TBTT probably out-score them on the songs front, and might just be the “better” band...whatever that means.
Posted by The Barman at 12:41 PM No comments:

An X-cellent night in Sydney

More on X at the Ex in Sydney last weekend in a little while, as well as Saturday night's support Tiger By The Tail. Meanwhile, here's some food for thought if you're in Melbourne. Not often you see a bill this good and it's Six Ft Hick's last show before Europe: 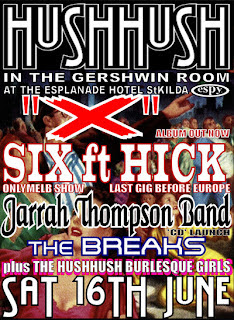 Posted by The Barman at 7:05 AM No comments:

Apologies if you've seen this elsewhere (it's moving right around the Web) but stiff shit if you have. The bottom line is that you can never get enough Sonic's Rendezvous Band. Here they are doing "City Slang", circa 1978.

Posted by The Barman at 8:43 PM No comments:

At Home With You

The re-issue of X’s “At Home With You” is out and I’m here to tell you that it’s essential listening, whether you already own it on vinyl or CD (guilty on both counts. Here’s where X “grew up” – in the broadest sense of the phrase. They broadened their sound by including a horn section, a ballad and upped the production values, without diluting their power.

The great thing about the Aztec re-issue is that it’s a double CD package, comprising as it does the original album, the flexidisc single (“El Salvador” live) and a rough and ready PBS live-to-air from St Kilda’s Prince of Wales Hotel in March 1985. It’s a scarcely adorned desktape – a bit of EQ’ing and that’s the extent of the pre-mastering production – and it rocks like hell. A true representation of what the band was like after its move to Melbourne (and all too infrequent tours further afield.)

I know punk purists (whatever they are) prefer “X-Aspirations” over “At Home With You” for its raw and visceral edge, but there’s no reason you can’t lap up both. “At Home With You” took five days to record (as opposed to the debut’s five hours) and has a markedly different feel with Steve Cafiero’s in-the-pocket muscle replaced by Cathy Green’s wickedly swinging backbeat, but they’re both superb in their own way.

Stay tuned for news about the rest of the back catalogue and prospective tours to the USA and Japan.

With all this X-love around the place, it’s a tragedy that Ian Rilen isn’t around to shrug it off. Take some advice and catch the current version (Steve Lucas, Cathy Green and Kim Volkman) when you can. They still do the band's name justice.
Posted by The Barman at 4:37 PM No comments:

Labels: At Home With You, x

Richard turns the TV off

On the face of it, seminal New York band Television looks to have broken up. That’s the only conclusion I can draw from guitarist Richard Lloyd’s announcement that he’s severing all ties. In short, Lloyd'd bringing out a new record and, to quote him, it "directly competes with Marquee Moon, Axis: Bold as Love, The Doors, Patti Smith's Horses, Bob Marley's Natty Dread, Neil Young's Harvest, or any other record you can name, as one of the greatest records ever made in the history of rock 'n roll. That being so, Richard needs to concentrate all of his energies to support it and its subsidiary philosophies".

Which of course looked like a pisstake on first reading but a personal message to the Marquee Moon mailing list made it clear that the Master of the Telecaster is deadly serious (if not in the least bit self deprecating.)

TV’s been a going (live) concern for the last decade or so, and given Lloyd’s prominent role (i.e. taking most of the solos) it’s clear that if Tom Verlaine and Co soldier on, it’s going to be a wildly different band. It reads as if Lloyd has tired (after 34 years already!) of playing second fiddle to Tom. There goes that difficult fourth studio album and any hope of seeing them in Australia. My one and only attempt to catch them at an All Tomorrow’s Parties festival date at UCLA a few years ago came to grief.

Great and esoteric guitarist that he is, Verlaine really needs someone to play yin to his yang and Lloyd's explosive soloing did just that. Jimmy Rip has filled this role in Verlaine's solo bands. Take that element away from Television and you're left with...noodling.

In tandem with Ken Shimamoto, I once tried to e-interview Lloyd for the I-94 Bar and the guy proved difficult, to say the least. Every reference to TV seemed to elicit a “I knew I’d be asked about that band” response, and since neither Ken or I had heard his then new solo album, “The Cover Doesn’t Matter”, it was hard to take a different tack. Lloyd also seemed to read double entendres into every other broad question (Legs McNeil and Gillian McCain’s “Please Kill Me” fuck-drug-and-tell-all expose had just come out) and we consigned the half-completed chat to the electronic trash. Pity, because Lloyd seemed (and seems) an interesting character.
Posted by The Barman at 10:18 AM No comments:

Once you're done with drinking...

...with the guy in the previous post, you can try this quick test to see how far gone you are. Any resemblance between the link and an the suggestion that you can test sobriety online is purely a drunken load of bullshit, OK?
Posted by The Barman at 9:24 PM No comments:

Sit down, have a drink

Been battling the 'flu in a big way lately, hence the lack of posts. Thus, what follows is purely medicinal.

I had to do away with the embedded shockwave file because it played an annoying piece of cocktail music in ther background, but click to test your skills at bartending. http://www.blogger.com/img/gl.link.gif
Posted by The Barman at 3:30 PM