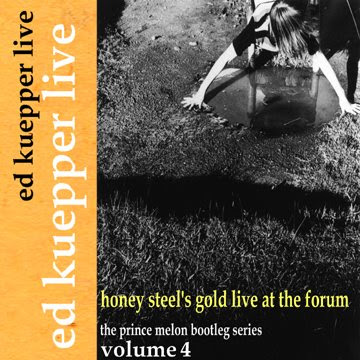 The 4th volume in the limited edition Ed Kuepper live series will be available soon. Recorded live to a capacity crowd at the Forum in Melbourne early 2008 on the Don't Look Back 'Honey Steel's Gold ' tour. It features all the hits and some rarely performed tracks such as 'King of vice' Friday's blue cheer/libertines of oxley' and 'summerfield', as well as the non lp encore of 'Electrical storm'

The Don't Look Back shows were one of the biggest highlights of 2008 for mine with the pairing of Ed and Co with Died Pretty fairly inspired. More info on this one at Prince Melon's myspace.
Posted by The Barman at 6:08 AM No comments:

OK, soccer is not rock and roll but blogs can be indulgent. The new Japanese sport of Binolcular Soccer probably won't catch on in a hurry but is worthy of your consideration:

And it does segue into the fact that the I-94 Bar will be presenting a Japan-Europe Tour Diary from Penny Ikinger in the near future.
Posted by The Barman at 5:40 AM No comments:

A review of that Walter Lure live album is posted at the Bar here. Short story: Rough 'n' ready and rocks pretty well and at 10 Euros a copy it's worthy of investment.
Posted by The Barman at 7:24 AM No comments:

Where did CBGB go?

It ended up in a storage shed according to the New York Times.
Posted by The Barman at 6:55 AM No comments:

King of the Gig Pigs

The I-94 Bar is looking for a live reviewer or two but this seems excessive:

After more than 5,000 gigs over 35 years, rock fan Ray Morrissey can claim to be Britain's most prolific concert-goer. On piles of notebook pages in Mr Morrissey's front room, thousands of gigs are listed, one per line, all with a mark out of 10 circled at the end.

Then again, when you look at Ray's website recording all this it's enough to give you a headache.
Posted by The Barman at 6:38 AM No comments:

He might be best known as the singer for agit-rock band Midnight Oil but chrome-domed Australian Environment Minister Peter Garrett was frontman for Farm before that. Farm really were the Oils but peddling different tunes.

Farm allegedly stood for Fucking All Right Mate but I might have disagreed with that, if only on the strength of them playing Focus and Jethro Tool songs. Click the pic to enlarge. 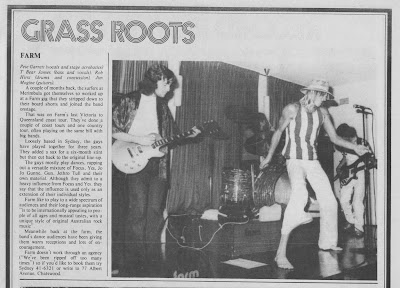 Posted by The Barman at 6:20 AM No comments:

How badly will this suck?

I'm a big fan of the Stooges - both the Iggy-led variety and the Three - so why wouldn't the thought of the Farrelly Brothers reviving the latter comedic trio fill me with dread? Who cares about the global financial crisis - this is seriously bad news. Read the guff here.
Posted by The Barman at 6:07 PM No comments: 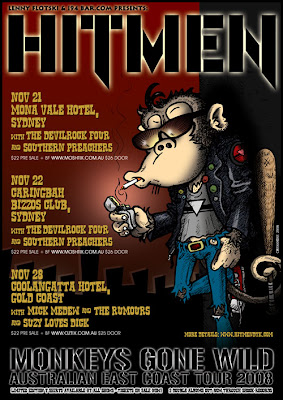 Some new "old" songs and a new "new" one will be in the set. Click to enlarge and read the details.
Posted by The Barman at 6:46 AM No comments:

Clash live gets the prole thumbs-up

For an apparent Marxist, this guy has a warm view of the Clash's "Live at Shea Stadium" on major label Sony.
Posted by The Barman at 4:55 PM No comments: 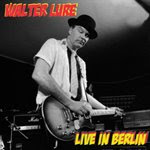 Ex-Heartbreaker Walter Lure toured Europe in 2007 and Italian label Nicotine Records is doing something about it. Here's the tracklisting for the live album:

Eyewitness accounts (thanks Greg Bowen in France) say the shows were great. Buy it here.
Posted by The Barman at 9:53 AM No comments:

The Age newspaper's annual EG Awards poll is up and running. It's a closed-ended poll i.e. you only get to vote for one from a list in each catergory.

Elitist hipster scum that I am, I couldn't vote for much as very little of what's in these mainstream voting things reflects what's played around the I-94 Bar.

You might be in that boat too. If so, you can at least vote for the Best Australian Album Of All Time catergory. At the time of voting, "Radios Apepar" was only running at three percent. That's a bit sad - but you know what to do.
Posted by The Barman at 6:32 AM No comments:

Conclusive evidence of Punk's death (if any were needed)


The Bratz™ are hitting the home of punk with the most devastatin’ street styles ever, and they are ready to rock! Available in four collectible styles (Cloe™, Yasmin™, Jade™, Meygan™), these girls are showing everybody how to be Pretty ‘N’ Punk™!

Posted by The Barman at 6:30 AM No comments:

You might remember an earlier post reporting that Radio Birdman's "Do The Pop!" had been included in this Guy Ritchie gangster movie. Yes it has - but it's barely audible.

The Scientists' "We Had Love" fared a little better, apparently. I haven't actually seen the film - I'm a 'wait for it on DVD' kinda guy these days.
Posted by The Barman at 12:20 PM No comments:

Labels: do the pop, guy ritchie, radio birdman, rocknrolla, Scientists, we had love

It's a new look Top Ten this year as we've moved it over to Wordpress to allow interactive comments. Ken Shimamoto (aka Stashdauber) is the first cab off the rank and you can read his entry here - and of course do better yourself if you're not hep to his jive.
Posted by The Barman at 11:24 PM 1 comment:

Ten Best Punk Rock Singers of All Time? Lookee here. The guy from Jawbreaker is one of them? What about Andrew WK while you're at it? Pussies.
Posted by The Barman at 2:27 PM 1 comment: It's Johnny Casino & The Secrets Week at the I-94 Bar. There's the Review of the new album ("I Am Who I Am, Not Who You Want Me To Be"), the "Drunk & Disorderly" Podcast, now the Interview and the album and accompanying EP are both on sale in The Shop. And the Sydney launch is this Saturday at The Empire at Annandale (which I'd attend except it's The Barmaid's birthday and she has other plans.).
Posted by The Barman at 10:12 PM No comments:

Labels: drunk and disorderly, i94bar, johnny casino and the secrets

This US election parody is too good not to watch.
Posted by The Barman at 1:09 PM No comments:

Further to the October 30 post about the lack of coverage of garage soul great Nathaniel Meyer's stroke and planned benefit show, news in from Norton Records that the man passed away in Detroit on November 1. Funeral is Tuesday.
Posted by The Barman at 9:19 AM No comments:

Not sure if I'll make it but it looks like the bomb:

Australian premiere of the festival favourite + a live Q&A with Andre himself from Chicago!

Andre Williams has written and recorded a number of landmark hit songs and has worked with legends of the industry: Berry Gordy, Ike Turner and Stevie Wonder to name just a few. Andre has also struggled throughout his life with addiction, poverty, homelessness and the legal system.

Andre says, 'I'm going to show you the right way, because I've gone so many wrong ways.' With this statement the man known as "Mr. Rhythm" and "The Black Godfather" takes us along a fascinating, funny and distressing journey. Andre doesn't always go "'the right way' and this leads to tenuous relationships with friends, family and business partners, time in jail, eviction from his "old folks home" and subsequent struggle to pay for his room at the 'Hotel 6' where he lives between tours.

From March of 2006 until July of 2007, directors Tricia Todd and Eric Matthies followed the charismatic underground recording artist Andre Williams through his day-to-day existence. For Andre, this could mean rehearsing for a show in Chicago, recording with Jon Spencer in Michigan, performing for enthusiastic fans in Croatia, doing a radio interview in Serbia or marching in a Mardi Gras parade in New Orleans.

Throughout his 72 years, Andre has never stopped driving his creative visions forward, regardless of cost or consequence. The consequences turn out to be severe as Andre's addictive history catches up with him. Ultimately doing the right thing could be the choice between life and death for a musician who is perpetually on the cusp of newfound success.

Popcorn Taxi is proud to present the very first screening in Australia of "Agile Mobile Hostile" followed by a live Q&A with the man himself, Andre Williams, live down-the-line from Chicago hosted by The Naked City's, Jay Katz.

Believe us - this year with Andre will definitely leave you feeling Agile, Mobile and Hostile!

Posted by The Barman at 6:55 AM No comments:

Fred "Sonic" Smith died 14 years ago yesterday (my time) or today (US time.) Thanks "bamesjaker" for the heads-up. Wayne Kramer remembers meeting Sonic and the formation of the MC5 in this clip from "A True Testimonial":

Posted by The Barman at 7:11 AM No comments:

Turn up your speakers and click here.
Posted by The Barman at 5:42 AM No comments:

Dead, warring Ramones should be no election surprise

Hot off the Reuters wires:

Punk rock innovators the Ramones made a joyful racket, but offstage they were rarely in tune.

Band members were known to feud about everything, from their song list to politics. Guitarist Johnny Ramone was a conservative, while singer Joey Ramone was a liberal.

Johnny and Joey are both dead now, but their feud lives on in the presidential race.

You see, Johnny’s widow Linda, using the Ramone moniker, has been campaigning for Republican John McCain, and Joey’s estate is none too happy about that.

“I just want it to be clear that Linda Cummings does not represent the political views of the Ramones,” said Mickey Leigh, the president of Ramones Productions who is also Joey’s brother.

“As for Joey Ramone, the only Ramones song he would sing at a Republican event would be ‘Glad to See You Go,’” Leigh said in a press release.

It’s not the first time Linda has created dischord among the Ramones. She dated Joey but eventually married Johnny, causing the two band members not speak to each other for years, even as they continued to tour and make records.
Posted by The Barman at 8:58 AM No comments:

This review of a show by The King Khan and BBQ Show last weekend makes me wish I was there. Here's some YouTubeage of their song "Waddlin' Around" to tide us all over:

Posted by The Barman at 2:54 PM No comments:

"I Wanna Hold Your Hand" - The Standells (via The Munsters)

Just to mark the fact that all 16 espisodes of The Munsters have just been released on DVD in the States, here are The Standells in their one and only appearance on the show.

Death of the Cassette Tape

Remember when you had to put the best of your treasured vinyl collection onto cassette just so you could play it in the car? When retail outlets actually sold albums in cassette format to suit people who travelled or moved house a lot and wanted to keep their music collection to a manageable size? When bootleggers recorded to boomboxes and DAT was something that went with DIS?

There's a scuplture at the International Surgical Museum that illustrates the Death of the Cassette Tape. See it here.
Posted by The Barman at 6:24 AM No comments: