Tuesday, July 24 is the funeral for William Hoyle, 23-year-old son of Pip and Sally. You may know his Dad as the keyboardist for Radio Birdman. The short story is that William passed away with a brain tumour last Wednesday, just as Pip and bandmates were about to be inducted into the Australian Recording Artists Industry Association Hall of Fame.

As you may have read in a past Barman's Rant, Pip passed up the recent North American Birdman tour to be at home with William in Sydney. Pip tells my mate, Italian rock journalist Roberto Calabro, that William had the thrill in their recent time together of meeting a touring Alice Cooper when he played Sydney's Enmore Theatre. The moment's been recorded in Rob's blog but for those that can't read Italian, we've reproduced the photo here. 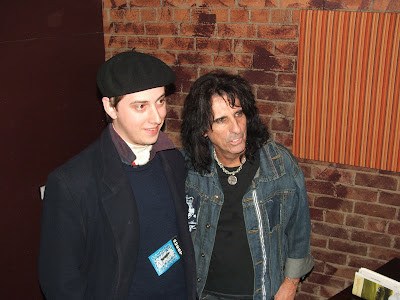 None of our words will, be adequate but feel free to leave some in the comments and they'll be passed on.
Posted by The Barman at 9:57 PM 1 comment:

New Roy Loney not far away 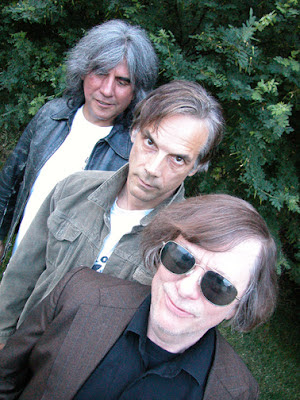 Here's some news that's a big deal in a few places. Spain, patches of the USA and yes, even Australia, are waiting for the new album by Roy Loney and the Longshots. It's called "Shake It Or Leave It" and it's shaping as something special. 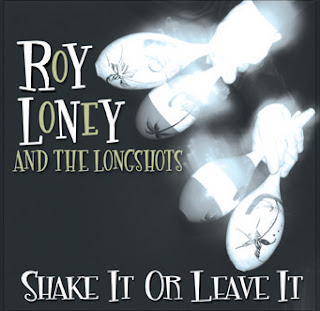 Roy's the original singer from the early Flamin' Groovies (some would say the best singer in the best line-up) and he's been rolling out a succession of good, and mostly great, albums since he moved on in the early '70s. "Shake It Or Leave It" has been a long time in the pipeline, with producer Ron Sanchez beavering away for months on end on sporadic sessions. More than a little of the work has involved guest guitarist Deniz Tek. That's Ron (top) pictured with Deniz and Roy in the photo above. The Iceman's contribution on guitar on "Don't Like Nothing" is said to be especially noteworthy.

Read about the sessions here and ready your ears for the release in September. It'll be be on Career Records and it'll have distro around the world. We'll let you know when it's out at the I-94 Bar when it's out.
Posted by The Barman at 3:18 PM No comments:

Sympathy For The Record Industry

Known for a multitude of things including releasing early efforts by Hole, The White Stripes, Turbonegro, Rocket from the Crypt and The 5,6,7,8's as well as resurrecting the classic music of immortals such as Roky Erickson, New York Dolls, Suicide, The Gun Club, Spacemen 3, The Scientists and Wanda Jackson and lets not forget the serious concentration on a plethora (like that word??) of bands in hot beds such as Memphis, Detroit and Montreal and also being among the first to look towards the Far East to unleash the demented and curious off-kilter sounds of those crazed ornamentals (Asians to you of a p.c. mindset)...
So what?? 'Big deal' you say, well, Sympathy has also worked with underated and seemingly unsung heroes like Billy Childish, The Oblivians, Holly Golightly la la la etc and are hailed for recognizing and employing important visual artists to create wonderous covers by Mark Ryden, Camille Rose Garcia, Yoshitoma Nara, Liz Mcgrath, Coop, The Pizz, Dan Clowes blah blah blah la la la etc ad infinitum...
Sympathy are also responsible for releasing records by untold bands of differing degrees of talent with really cool names like The Pleasure F*ckers, Banana Erectors, Anal Babes, Candypants, Teenage Larvae, Tri-State Kill Spree, Iowa Beef Experience, The Child Molesters, Penetration Moon, Smegma, Ethyl Meatplow, The Spaceshits and Destroy All Monsters...

Single-handedly responsible for lowering the standards of the entire record industry...

"We almost really care'
"Is a force this powerful going to be overlooked by an industry that needs all the Sympathy it can get"
"You've tried the rest now go f*ck yourself"
"Sound and fury signifying nothing" (ok, we stole that one from Shakespere)
"West coast perpetrators of the finest in musical mayhem"
"The most favoritest populars, cost so little goody you like 'em"
'A name you can pronounce since 1988"
'18 years of performance anxiety, instability and poor judgement'
'We just don't know when to gve up'
"A tradition of obscurity and obsolescence"

Sympathy is a great label that's been home to lots of great bands. That Long John Gone is of the opinion it's going nowhere may be symptomatic of outstanding rock and roll music as we know it gradually going under - or he might just be shagged out.
Posted by The Barman at 9:29 PM No comments:

What's the use of YouTube if you don't share? Cop this: Scott Morgan's Powertrane (with special guest Deniz Tek) rocking out on "Taboo", the song co-written by the MC5's Rob Tyner and Powertrane guitarist Robert Gillespie, at the Blind Pig in Ann Arbor in June. Thanks to Dave Champion for the link.

And a reminder - that long-awaited Powertrane studio album, which has been held up by pressing problems, should be days away from a proper release. (Early copies lacked this very song.)
Posted by The Barman at 11:15 PM No comments:

Andrew Connell from Queensland sent a link to this TouTube footage of an early Midnight Oil playing a stilted and sedate version of one of their first album songs, "Used And Abused". It's most notable for the fact that Peter Garrett (now an Australian Member of Parliament and Federal Shadow Minister for the Environment) still had hair, and guitarist Jim Moginie sported a beard.

Posted by The Barman at 9:08 AM No comments:

And in honour of what's occuring in Brisbane tomorrow night

If you haven't heard, the (sort of) original Saints are reforming at the Pig City festival. Here's what those of us unable to make it are missing:


I say "original" because the version that started in Ed Kuepper's garage had drummer Ivor Haye on bass. But let's not be pedantic. The line-up will be sans bassist Kym Bradshaw who apparently is not on talking terms. But there will be a brass section and I bet they do "Know Your Product":

Rock and Roll Is An Old Person's Game

If proof was ever needed:

Richie to chance his Arm of Rock elsewhere

Big news if you're a band or a live music punter in Melbourne arrived via email this afternoon. Richie Ramone, co-owner and manager of The Tote Hotel - the live music hub of Australia's live music Mecca, Melbourne - has bailed out. Here its is, as it arrived:

The old cricketer retires his innings.

With a pleasurable sense of fulfillment achieved, it is time for this Ramone to pack up his drum kit and find a new home in which to set it up in.

It was mid-December, having just seen Swedish psych rock act The Soundtrack of Our Lives play their second show at the Tote – a mind-altering 3½ hour long extravaganza and the single greatest show I have seen this decade - when I realised I had achieved everything I wanted to at the Tote in my six years as co-owner and manager of the much-loved Melbourne institution. Had you asked me back in July 2001 “if you could have any one band in the world play at the Tote, who would you choose?” I would’ve replied “The Soundtrack of Our Lives” without hesitation.

Over the past six years I have been fond of stating “there’s not too many blokes that get to own their favourite pub” and so it is with a hint of sadness that I move on, but I am confident the Tote will only continue to grow in stature amongst the music-loving and noise-making population of Melbourne. Us music lovers can only hope the councils and residents that seem determined to turn Melbourne’s flourishing live music scene into a sedate, obedient, lack-lustre minnow, will eventually pull their heads in and allow musicians and fans to continue to enjoy themselves in the manner they love. It is only with continued support of our live music scene that together we can hold back the rising tide of gentrification.

It has truly been an honour to be custodian of such an iconic part of Melbourne culture as the Tote. I have been incredibly fortunate to make many new friends and see countless amazing performances, and I look forward to continuing my long-standing love affair with the Tote, but as the punter I started off as 23 years ago. The stories that have been retold - of best friends meeting at the Tote, chance meetings resulting in marriage (myself included!), wedding receptions held in the band room and countless birthday gatherings - have given me immense joy at the passion in their delivery.

I eagerly await the “story” that is currently unfolding as Natalie Van Den Dungen nears completion of the Tote documentary she began working on a few years ago. Having seen snippets of the film recently, I am very excited to report that this film will be an incredible documentation of such a vital part of Melbourne music history. Also look out for the interviews with prominent musicians in Craig Kamber’s film on the Melbourne punk/rock scene 1976-1982, the majority of which were conducted within the Tote.

The Brothers Milne will now take over the running of the Tote and as we remain old friends I wish them all the very best and as already suggested, I hope the punters continue to strongly support live music, for without their support we will only be left with pokie joints and new apartments. The Booking Office remains the same, as do the bar managers and staff.

What am I going to do? I can’t quite decide between Forensic Investigation and becoming a Poodle Groomer, but in the meantime I will continue to bamboozle bogans everywhere I can with an eclectic mix of tunes under the guise of DJ Snaps Truly – “kicking goals for rock’n’roll” – and can be contacted via DJsnapstruly@gmail.com in regards to this line of work. I will also continue to use this Dodo address. Another long term passion, spanning 23 seasons, will see me focus on my cricket club the Abbotsford Anglers, as I strive for that elusive maiden century.

All Tote enquiries and business should now be directed towards Bruce Milne on bruce@thetotehotel.com

Richie's "Arm of Rock" is a well-inked limb with tatts of his top bands thereon, The Soundtrack Of Our Lives being especially prominent. Sad news but I'll bet Richie won't be absent from the Melbourne music scene. The pub's in good hands with the Milne brothers (Bruce being the Godfather of Underground Music, down south.)
Posted by The Barman at 9:42 PM No comments: